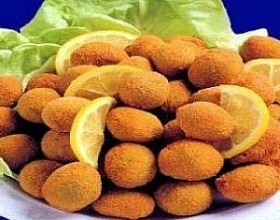 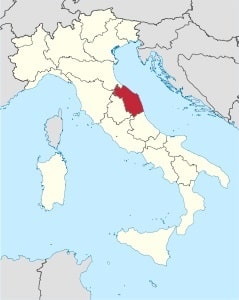 The Marche is a confederation of cuisine. Located at the center of the Italian peninsula, it identifies with the ancient Piceno territory (IX – IV century BC), still presenting a plurality of dialects, customs and folklore. The gastronomic uses of the Pesarese and Montefeltro are closely related to those of the neighboring Romagna (soups), as well as the dishes of the last southern strip are largely influenced by those of the Abruzzo region. There are two aspects of the local cuisine corresponding to the geographical characteristics of the region: the hinterland and the maritime one. 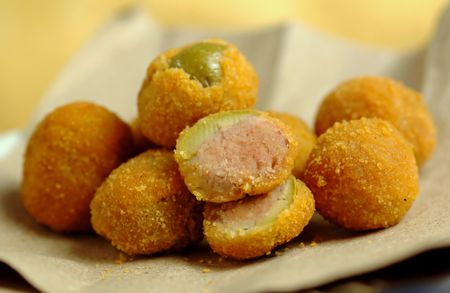 Aspect of the Marche cuisine is dominated by mushrooms, the use of olives and truffles. Truffle is the sublime condiment of homemade tagliatelle (local egg pasta), from the localities of Pesarese, dell’Ascolano and of the Maceratese, today it guarantees an important integrative resource to the rural economy thanks to the Acqualagna market, where one third of the entire annual Italian truffle production is concentrated. 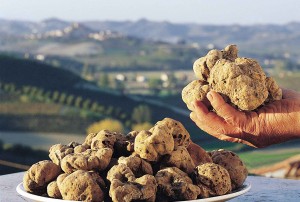 The gastronomy of the Marche region, which has a real taste in the field of stuffed foods, has one of the most representative dishes in the Ascolana olives, whose cultivar was already appreciated by the Romans.

The main dishes of the hinterland are based on pork, among which stand out the tasty “porchetta”, and the cotechino of the fortress of San Leo, which is said to have also eaten Cagliostro when he was locked up.

On the coast of the Marche instead you can taste a large quantity of fish products. Dish symbol is the “fish broth”, interpreted differently in each port, from the red (tomato) of the Pesarese to the yellow (saffron) dell’Ascolano. In use between the Conca river (Romagna border) and the River Tronto (before the Abruzzi) there is a “potacchio”, deriving from the French “potage”, that in this area it does not designate a soup but a small marinated sauce with stockfish, chicken or rabbit. 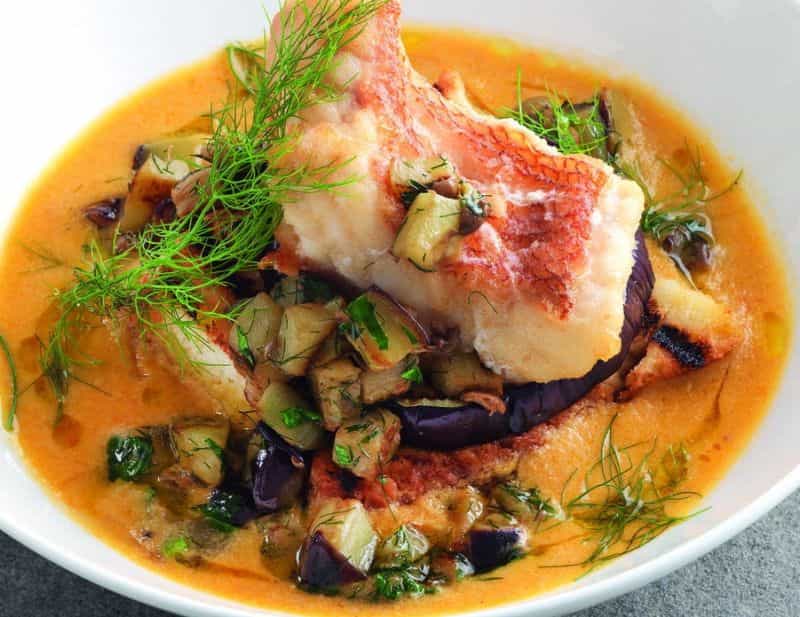 The typical antipasto of the region is cold and can be composed of a wide variety of local meats and cheeses such as the salami of Fabriano, the salamini alla cacciatora, the ham, the ciauscolo (typical salami), the loin, the ham of Carpegna, the ciarimbolo, the mazzafegato, the galantine, the migliaccio, the salame of sheep, the aromatized ham of the Montefeltro, the salami suppressed of Frattula, the liver sausage, the cheese of fossa (cheese seasoned in cave), the pecorino in barrel, the raviggiolo and the casciotta d’Urbino).

The meats and cheeses are accompanied by the mixture of bread dough and round shape to eat with the field herbs cooked in a pan including chicory. In addition, especially during Easter the Easter pizza, with salty and leavened dough, in the shape of panettone and with chunks of cheese, usually pecorino and parmesan; on Easter day there is usually no hard boiled eggs along with meats and cheeses.

Sovrano of the first macerates and anconitani dishes are the Vincisgrassi (plate similar to lasagna); Tradition goes back to its name to a distortion of that of the Austrian general Windisch-Graetz, who fought against Napoleon: however, it is a fact that the plate was already present in some books of recipes of the 1700s, where they were called Princisgras. 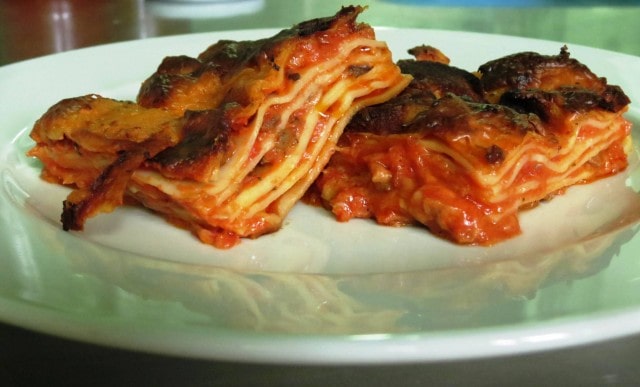 Other traditional soups from the Ancona area and the Ascoli area are less opulent: the quadrucci with the potatoes (or the beans, or beans and pork rinds), the Pecianelle of Sassoferrato (big leavened spaghetti with tomato sauce). 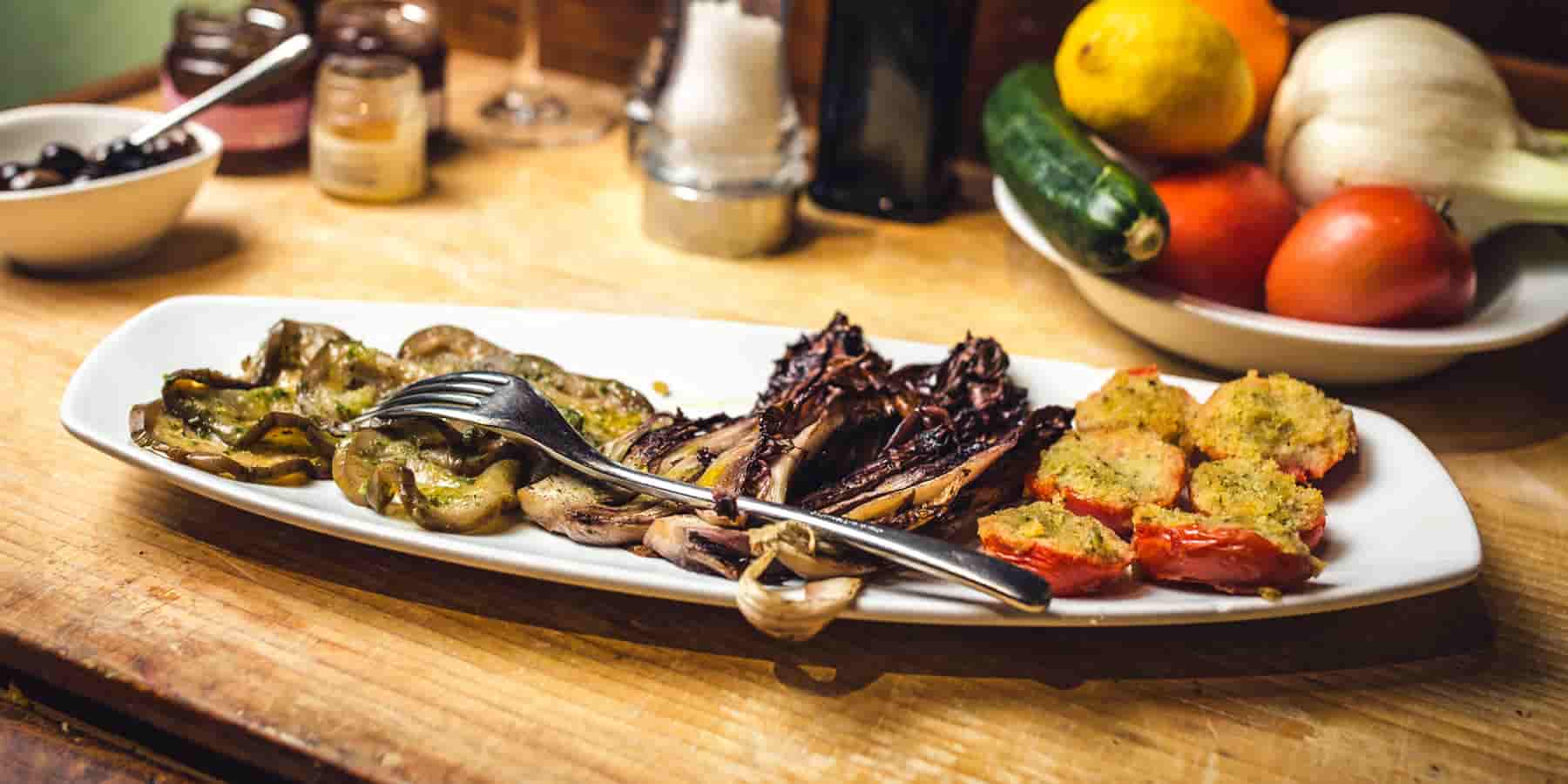 the Frescarelli (lumps of flour cooked in water and seasoned with garlic and pecorino cheese). The bruschetta and panzanella are popular bread-based dishes in the Marche region as well as in Tuscany, Umbria and Lazio. To remember also passatelli, homemade pasta originally from Pesaro, usually served in broth. In the Fermano are produced the “maccheroncini di Campofilone”, seasoned as you like.

Among the main dishes of the center of the region we should mention the pork in “porchetta”, the tripe, the roast chicken  (that is flavored with a thick slice of lard), the chicken with peppers, the marinated lamb, the lamb corate and the omelette with mint (typical dishes of the Easter period). 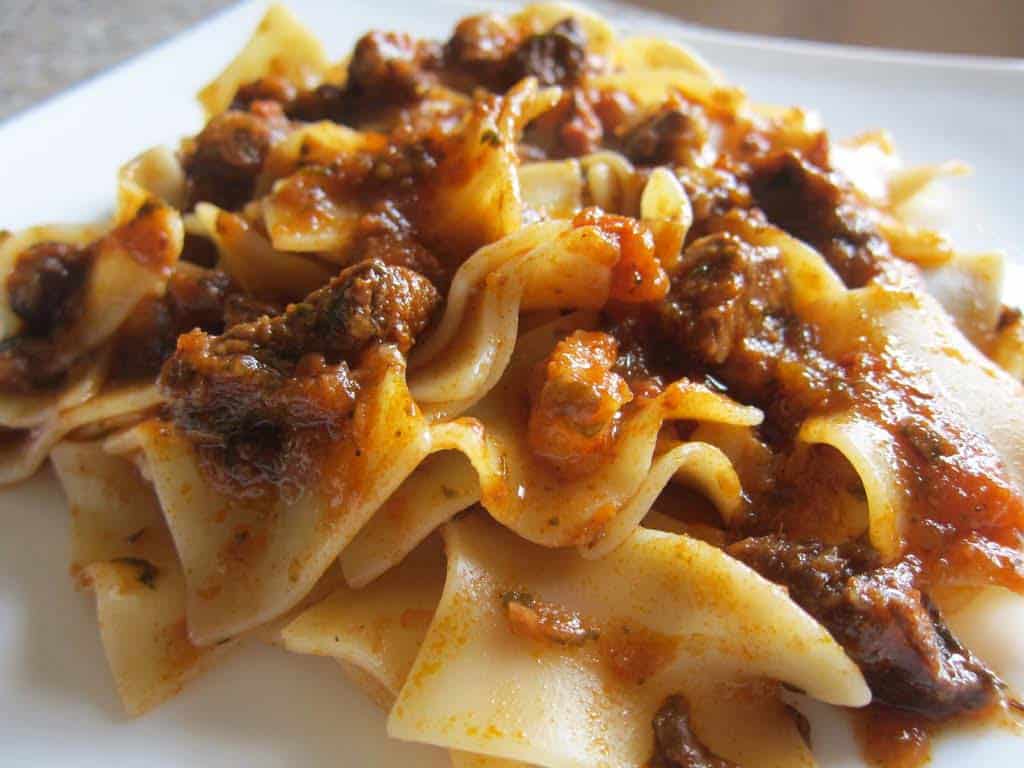 Typical of the capital are the stockfish in Ancona soup, with tomato, anchovies. Famous is the fried all’ascolana, consisting mainly of Ascolan olives (stuffed with meat, breaded and fried) and cremini (cubes of custard, breaded and fried).

typical of the Pesarese is a braised one that throws its origins more than one hundred years ago … the pasticciata alla pesarese, consists in a loin of veal browned, cut into slices then cooked in a tomato sauce.

It is usually accompanied by mashed potatoes and mixed herbs in a pan.

For desserts we remember the so-called black pudding, from the flavors and techniques of the renaissance (around the 1500s), consisting of a mixture of bread crumbs, honey, rum, cinnamon, sapa (grape syrup) and orange peel crammed into pork casing and boiled for half an hour; also the nougat has a long and illustrious tradition here. The traditional Frustingo is a dessert made with dried figs, honey and citrus peel; it is prepared throughout the region and is typical of the Christmas holidays. The “Zuppa Inglese” is also widespread. 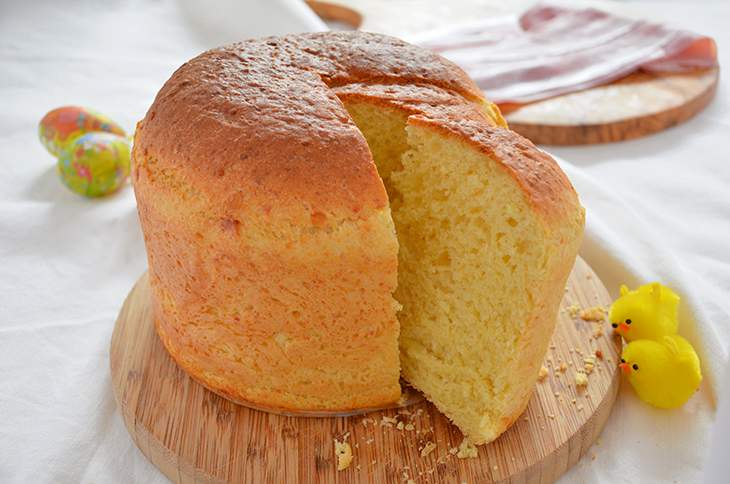 Do not forget the typical Christmas bread with walnuts, cooked in a wood oven and obtained from the traditional bread dough with the addition, given the special festive occasion, of dried figs, raisins, walnuts and pepper;

In the area of Apiro and Cingoli you can find the “cavallucci”, small cakes filled with figs and chocolate. Also throughout the region are the “maritozzi” a dough of sweet bread with raisins and aniseed with a layer of glaze, the “sweet peaches” or two halves of shortcrust pastry, soaked in the Alchermes liqueur and filled with chocolate, 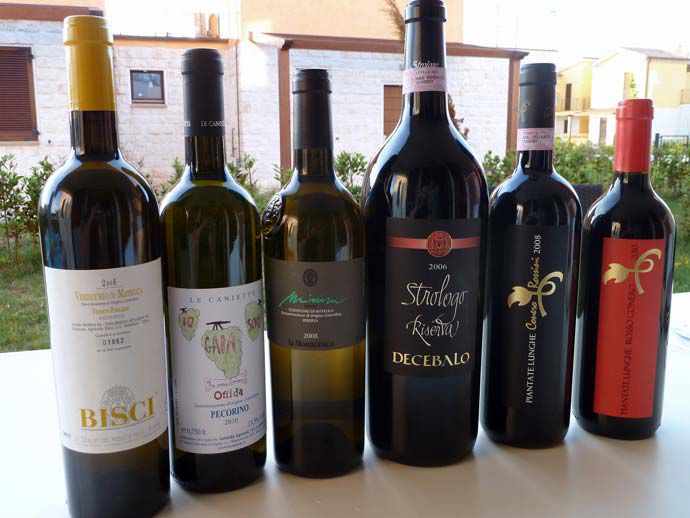 Wine with Denomination of controlled and guaranteed origin (DOCG)

Conero produced in the province of Ancona

Offida (white and red) produced in the province of Ascoli Piceno

Verdicchio di Matelica riserva (white), produced in the municipalities close to that of Matelica in the provinces of Ancona and Macerata

Vernaccia di Serrapetrona, produced in the province of Macerata

Colli Maceratesi produced in the province of Macerata

Esino produced in the provinces of Ancona and Macerata

The lands of Sanseverino produced in the province of Macerata

Offida produced in the province of Ascoli Piceno and Fermo

Rosso Conero produced in the province of Ancona

Rosso Piceno produced in the provinces of Ancona, Ascoli Piceno and Macerata

Verdicchio dei Castelli di Jesi accompanied or not from the sub-zone: classic, allowed: the use of additional geographical indications; produced in the provinces of Ancona and Macerata

Verdicchio di Matelica produced in the provinces of Ancona and Macerata 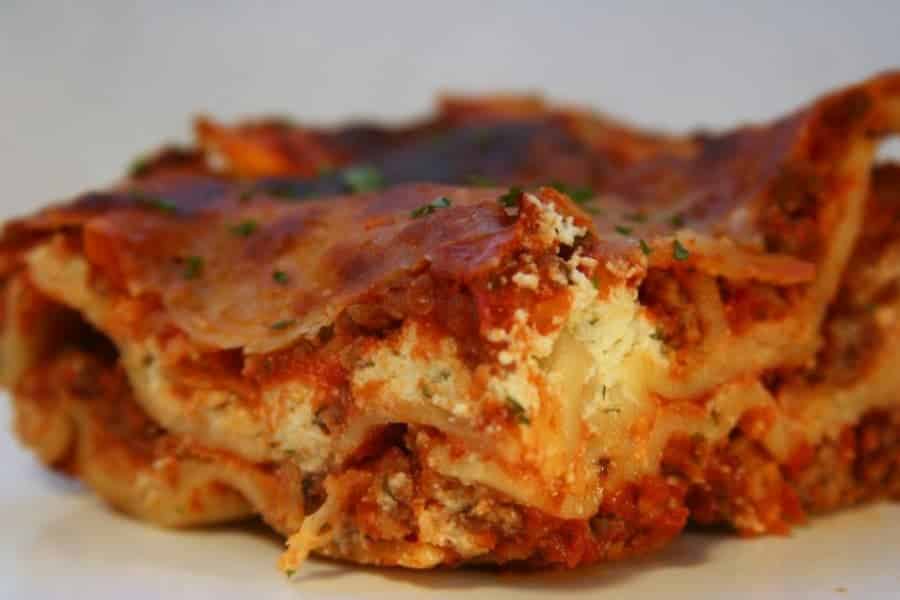 if you want to learn how to make fresh handmade tagliatelle, with the traditional Bolognese Meat Sauce subscribe to one of my classes.
Short class
One-day class

We use cookies to make sure you can have the best experience on our site. If you continue to use this site we will assume that you are happy with it.OkNoRead More