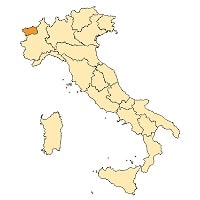 I decided to publish this research to explain the great Italian cultural heritage contained within the food, a lot of person can not the great diversity of food that there is between the Italian regions.

It will be a journey along 20 chapters, one for each region of Italy. Ok!! let’s begin

Compared to the rest of Italy, there is above all the absence of wheat, which led to rye bread.

Another element that is scarce in traditional dishes is oil, replaced by butter and other vegetable and animal fats.

Living with local products and limiting the exchange with the outside to a minimum, we can define the culinary tradition of the Valle d’Aosta as the only local cuisine that is detached from the tradition of other Italian cuisines, showing great affinity with the neighboring transalpine regions (Savoy, Haute-Savoie and Valais).

The local products are essentially mountain cereals, dairy products from cattle and goats, the meat is from cattle, pigs and chamois. In addition to traditional local food products, the main ingredients are: vegetables (turnips, leeks, onions), potatoes, chestnuts, apples and pears.

The presence of rice is located in the area of the Val di Cogne and is due to the Piedmontese origin of the inhabitants. 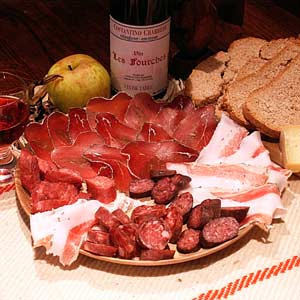 Lard of Arnad;
Dzambon, which may refer to either the Jambon de Bosses or the char-grilled ham(“Jambon à la braise”) of    Saint-Oyen or the Saint-Marcel ham;
Mocetta (dried meat) of bovine or chamois;
Saouceusses (sausages);
Boudins, pork sausages with various spices and beetroot;
Saint-Marcel ham; 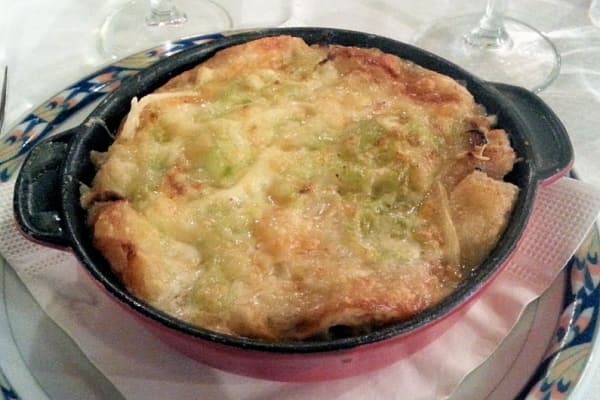 Chnéfflene, small pieces of batter (flour, water, milk, egg) cooked in boiling water and seasoned with fondue, cream and speck or braised onion, and chnolle, small cornmeal dumplings, both typical Walser dishes from the upper Lys valley ( Gressoney-Saint-Jean), to be eaten in a pork broth;
La pèilà, a soup of rye and wheat flour, with bread, fontina and butter. According to Dr. César-Emmanuel Grappein of Cogne, its inventor, this soup has healing powers;
Polenta;
Rice and chestnuts with milk;
Rice and fontina; 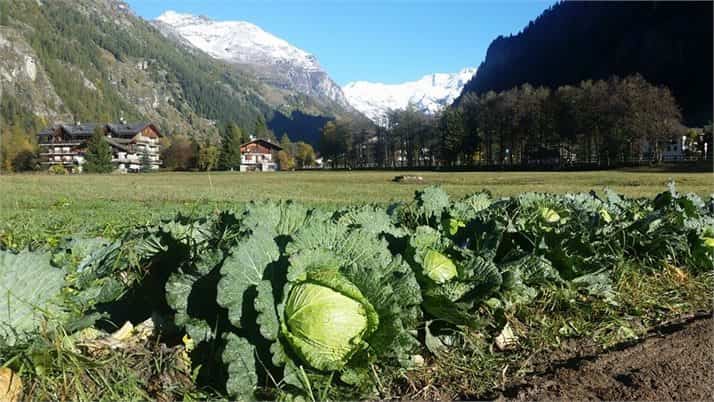 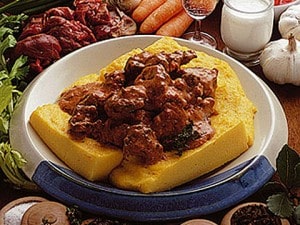 Bouilli à la saumure, a boiled salted meat, which can be found in the Aosta Valley butchers in autumn and winter, with sausages and potatoes;

The carbonade, an ancient dish typical of the western Alps, also widespread in the south-east of France, based on beef, salted for 12 days and cooked slowly with garlic and smoked lard. Then add a sauce  dry white wine, an egg, flour, cinnamon, cloves, pepper and nutmeg. Today it is also prepared with red wine;

Veal cutlet of Valdostana, with fontina and eggs, fried in butter;

Fricandeau, a veal walnut in pieces with onion, rosemary, aromatic herbs and white wine. To be eaten with polenta;

Truite au bleu, boiled trout, to be served with oil, lemon and potatoes;

Valdostan crêpes, with fontina and ham; 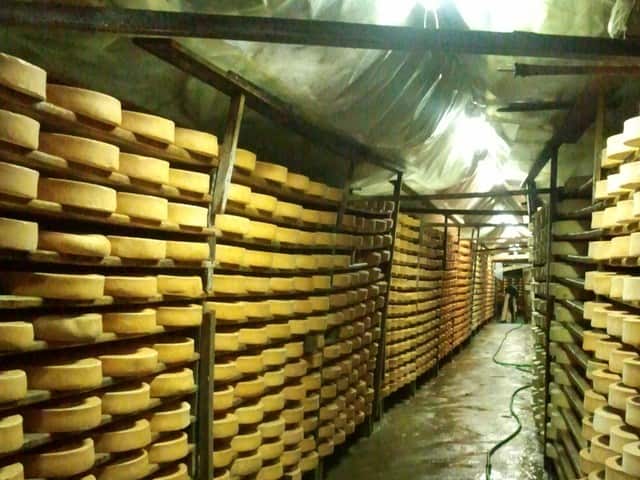 Fontina the most famous cheese of Valle d’Aosta;

Séràs, dairy product derived from whole milk, after the extraction of fontina, typical of the lower Valle d’Aosta;

Fondue hard cheese that is melted inside a special pot;

Réblec, fresh cheese and whole milk fat, to be eaten with salt and pepper or with sugar;

Salignon, semi-raw cheese, produced in the lower Valle d’Aosta, between Hône and Canavese, to eat with miasse, the crust of polenta;

Toma, in particular that of Gressoney 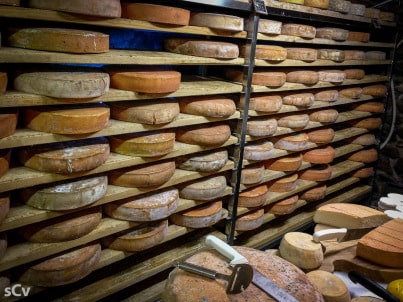 Among the old cheeses, the historian Jean-Baptiste de Tillier also recalls the Cittrun, the Grisen, the Saint-Barthélemy, the Muney and the Layet. 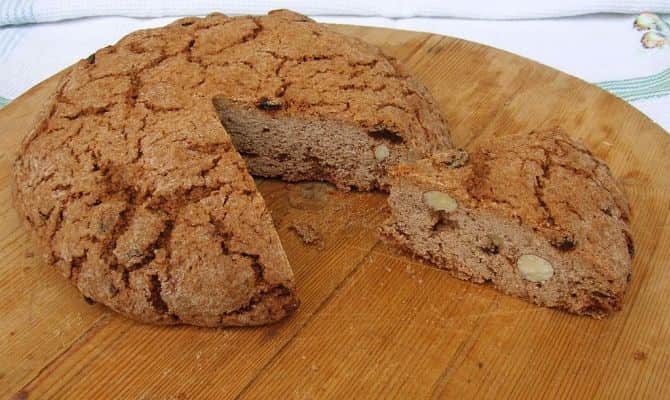 Brochat, freshly milked milk with red wine and a lot of sugar;

Fiandolein, from the verb fian-é (“shake slightly”), based on eggs, milk, sugar, rum and lemon peel;

Flantse, prepared in a common oven once a year, with pumpkin and bread. Joy for the little ones, the flantse is always made with religious designs or symbols;

Honey, very tasty if from the pasture, in the lower Valle d’Aosta especially chestnuts;

The merveilles, or the chatter, similar to the French bugnes;

Grappa, obtained by distillation of marc between November and December;

Café à la cogneintse, also called café à la valdôtaine (Aosta Valley coffee), prepared by direct infusion with Grappa, sugar, lemon peel, then brought to a flame, the alcohol burns and caramels the sugar on the edge of the cup. To drink in turn (à la ronde) in the cup of friendship without resting it on the table before it is finished;

Génépy is the common name of several species of aromatic plants of the genus Artemisia which grow in the Western Alps (Artemisia umbelliformis, Artemisia genipi or Artemisia glacialis); from some it is derived by infusion and distillation a liqueur bearing the same name Génépy. 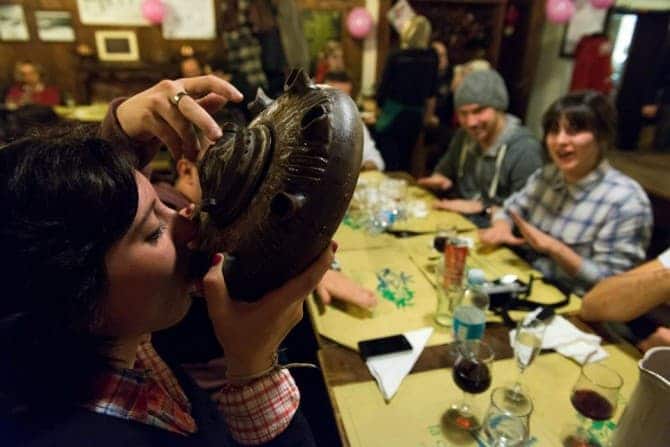 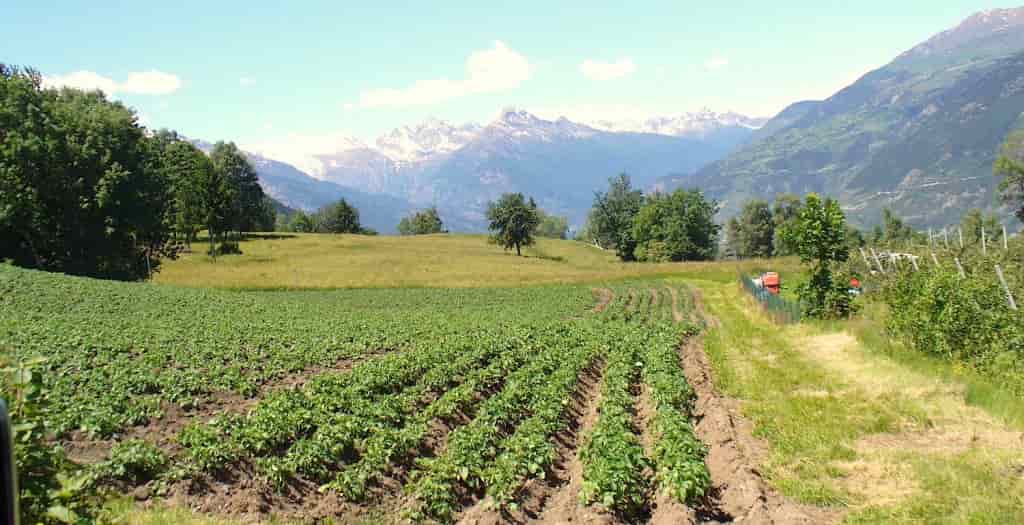 See you soonmwith the new article where I will talk about Piedmont food.

.site-info { display: none; }
We use cookies to make sure you can have the best experience on our site. If you continue to use this site we will assume that you are happy with it.OkNoRead More